5 Big Predictions about the 2016 Oakland Raiders

Training camp begins this week for most NFL teams and expectations are high for the 2016 Raiders. Fans and media alike believe that this is the year that the Raiders will make playoffs for the first time since the 2002-2003 season.

Predicting playoffs alone is too simple, too plain for me. Here are 5 big predictions for the 2016 Raiders going into training camp:

This outcome was in the realm of possibility last season when, after the first six games of the season, Carr had completed 65.8 percent of his passes and the offense appeared to be on the cusp of clicking even better and becoming elite.

The Raiders’ franchise leader in completion percentage over a season is Rich Gannon, who achieved the record 67.6% in the team’s 2002 Super Bowl season. That season broke Ken Stabler’s previous franchise best 66.7% which was set in 1976.

Forty years after Stabler set that mark, I predict Carr will set a new record completion percentage for the Raiders.

Like the first prediction, this prognostication could also have happened in 2015. Last year, Mack lost the sack battle to J.J. Watt 15 to 17.5. But things look to have changed coming into 2016.

With another season under his belt and just starting to come into his own as a defensive force, Mack should be able to increase his sack total on his own. Football isn’t a one person sport, however, and the defense around Mack has also improved over the offseason with the addition of Bruce Irvin and Shilique Calhoun as well as the eventual presumed return of Aldon Smith.

On the other end of the spectrum, J.J. Watt just had back surgery which reportedly has an 8-10 week recovery time-frame and that’s if everything goes well. Plus, that projected recovery time is just to get him back on field – it wouldn’t put him at 100%. And, in fact, it’s possible that he could never hit 100% again as back surgeries are notoriously hard on the body.

All of this is to say that Mack has as good a chance as anyone to be the sack leader in 2016 and the prediction here is that he’ll do it. 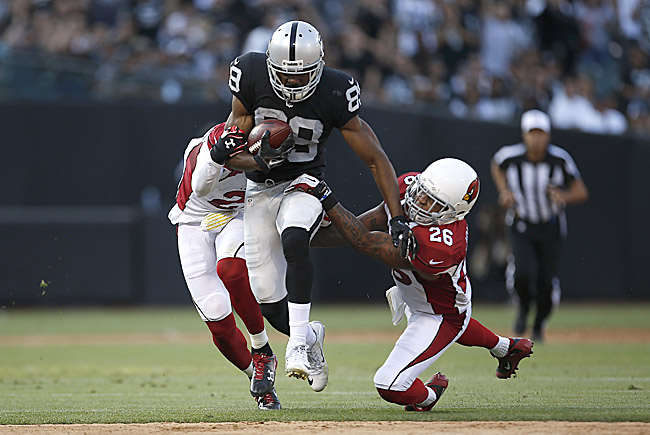 In 2015, Amari Cooper was a stand-out receiver for the Raiders before a foot injury slowed his ability to cut and get separation. Even with the injury, the rookie achieved 1,070 receiving yards which was good enough for him to be the 20th wide receiver in the league.

Next year, health permitting, Cooper can definitely push into the top 10 league-wide. Statistics change year to year but last year, the 10th most productive wide receiver by yards, Calvin Johnson, had 1,214 receiving yards. With Cooper healthy and with a solid off-season’s work with Carr, his targets, receptions and yards all should climb in 2016, which could push him into the top 10 in the league.

The Raiders finished middle of the pack in interceptions last year, tying four other teams with 14 total. Despite Charles Woodson’s retirement, the Raiders look to be in a better place coming into 2016.

Last year’s third place team was the Cincinnati Bengals who had 21 interceptions as a unit. However, eight of those interceptions were pulled in by one man: free safety Reggie Nelson, who signed with Oakland over the off-season. Nelson tied for the lead in interceptions last year with his 8 – more than a third of the Bengals’ team interceptions.

Nelson was not the only addition to the Raiders’ secondary in the offseason, though. Veteran cornerback Sean Smith also signed to play in Silver and Black. Smith is not a ball hawk by any stretch of the imagination – in fact, he only has 10 career interceptions in the NFL. But he is a very solid cover cornerback whose size and skill incentivizes quarterbacks to throw away from him and in another direction. To support this: the player that tied Reggie Nelson for the league lead in interceptions in 2015 was Smith’s Kansas City defensive opposite, Marcus Peters.

The Raiders also return David Amerson who picked up 4 interceptions in his first season in Oakland, with all 4 coming in the second half of the season after he became more comfortable with the Raider defense. He also was playing opposite lesser cornerbacks than Sean Smith and Smith’s signing should help Amerson see additional targets.

Finally, the team drafted all-around college standout Karl Joseph who should also help the team with interceptions. The magic number to be a top 3 team for interceptions last year was 21. With the increased secondary talent this year, the team should be able to sneak into the top of the league.

For the reasons mentioned in the first four predictions, the Raiders should see another bump in their win column this season and with the talent on offense and defense, there is no reason the team shouldn’t be able to win the AFC West for the first time since 2002.

While Denver remains a consistent media favorite due to their defense, I do not agree with that assessment. Defense is very important for winning but there is no position more important than quarterback and the Broncos appear to be lacking in that department. While they can still be competitive, I think Denver’s time at the top of the AFC is through for now.

San Diego isn’t a bad team – they still have talent throughout the squad – but they don’t have enough playmakers to be truly competitive. I do not expect the Chargers to push for the AFC West lead but they have enough talent to play the part of spoiler to one or two of the other 3 teams vying for the title.

Which leads us to the Raiders most likely challenger for AFC West supremacy: The Kansas City Chiefs. The Chiefs went 11-5 in 2015 including sweeping the Raiders and the Chargers and splitting their games with the Broncos. The Chiefs return most of their key players  and get Jamaal Charles back from an early 2015-season-ending injury. I’d give them the edge except that I’m not a believer in Alex Smith when the chips are down and I think the Raiders will be much improved on both sides of the ball this year with the Chiefs about the same or slightly lower.

Obviously, any of these 5 predictions will be good news for the Raiders. If all 5 happen, it will be a spectacular season by almost any measure. Is a Super Bowl out of reach? Only time will tell. And that journey starts this week, when the Raiders begin their Training Camp.